They say the salafis and Ahl al-Hadith have no chains and thus they have no musnad Ilm.

The scholars of Hindh and the various lands are known for ilm and expertise in the various sciences. Numerous African scholars and hindhi.

For example there is only one person between shaikh Rabi and Shaikh Nazir Hussain Muhadith Dehlawi.

All of the scholars of hindh have chains back to Bukhari and there are many of them that saying we don't have chains is laughable. His chain is through his Father Shaikh Abdul Salam Mubarakpuri and the Shaikh Abu Ala Abdul Rahman Mubarakpuri. And their chains go via Shaikh Nazir Hussain and Shaikh Abdullah Ghazipuri through Imam Shawkani.

We also have the Chains of Shaikh Muhsin al-Yamani. They had chains to all books of Hadith. It should also be noted I reproduced a photo of the ijazah Shaikh Abdul Rahman Mubarakpuri gave to shaikh Muhammad ibn Ibrahim al-ash-Shaikh.

Also the chain of Shaikh Abdul Rahman Mubarakpuri to Shaikh Raghib Tabbakh who in turn passed it to Shaikh al-Albani... let the ignorant one who claims the Salafis and Ahl al-Hadith have no chains, lower his head in utter shame.


Shaikh Ṣiddiq Ḥasan Khān also had strong links and ties with the Scholars of Najd, from the likes of

the following are th chains of Shaikh Mubārakpūrī which go back to the Messenger of Allāh Sallalahu Alayhi Wasallam via various scholars. These are more glorious chains of the Ahl al-Ḥadith and Salafī's 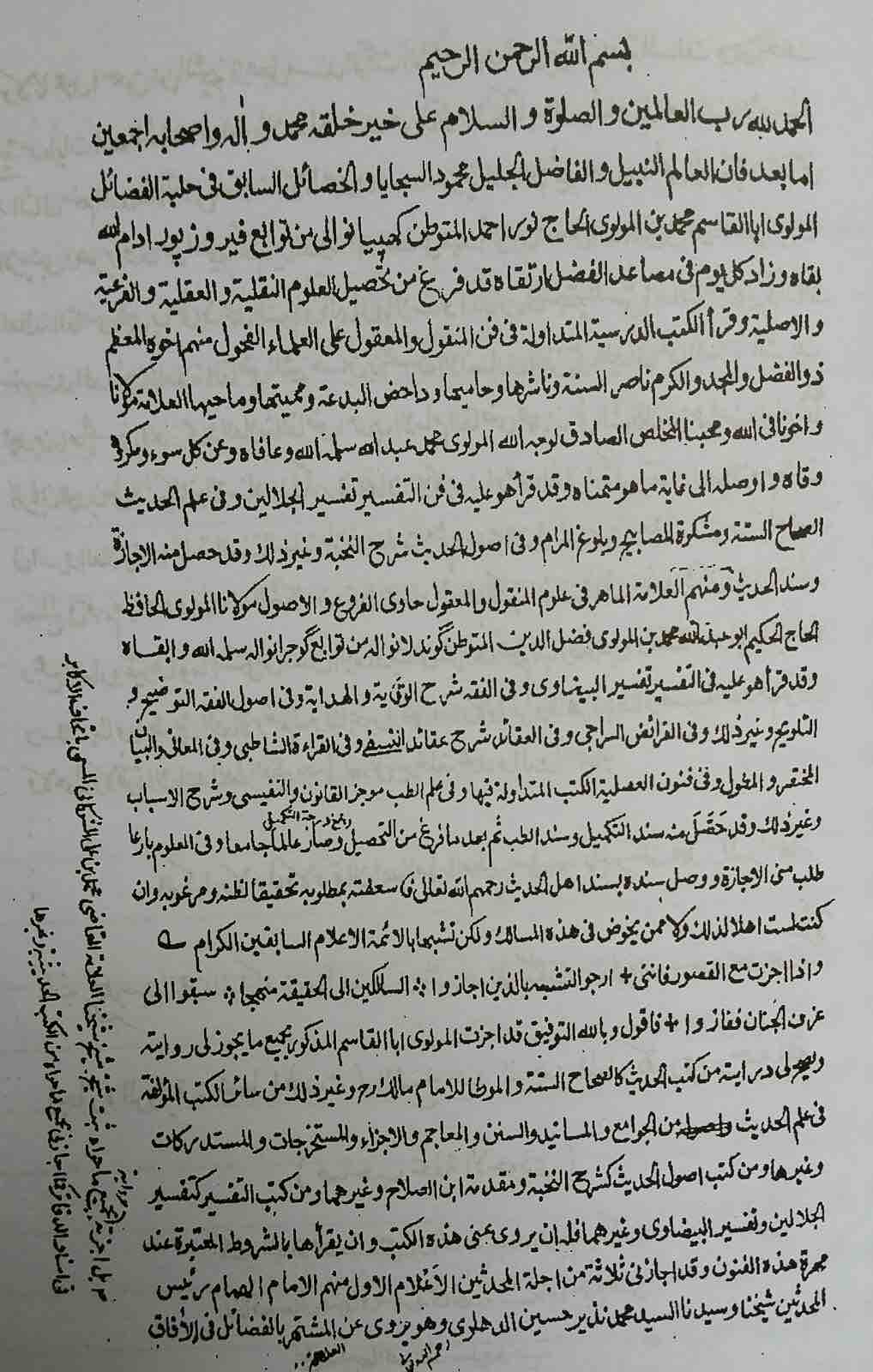 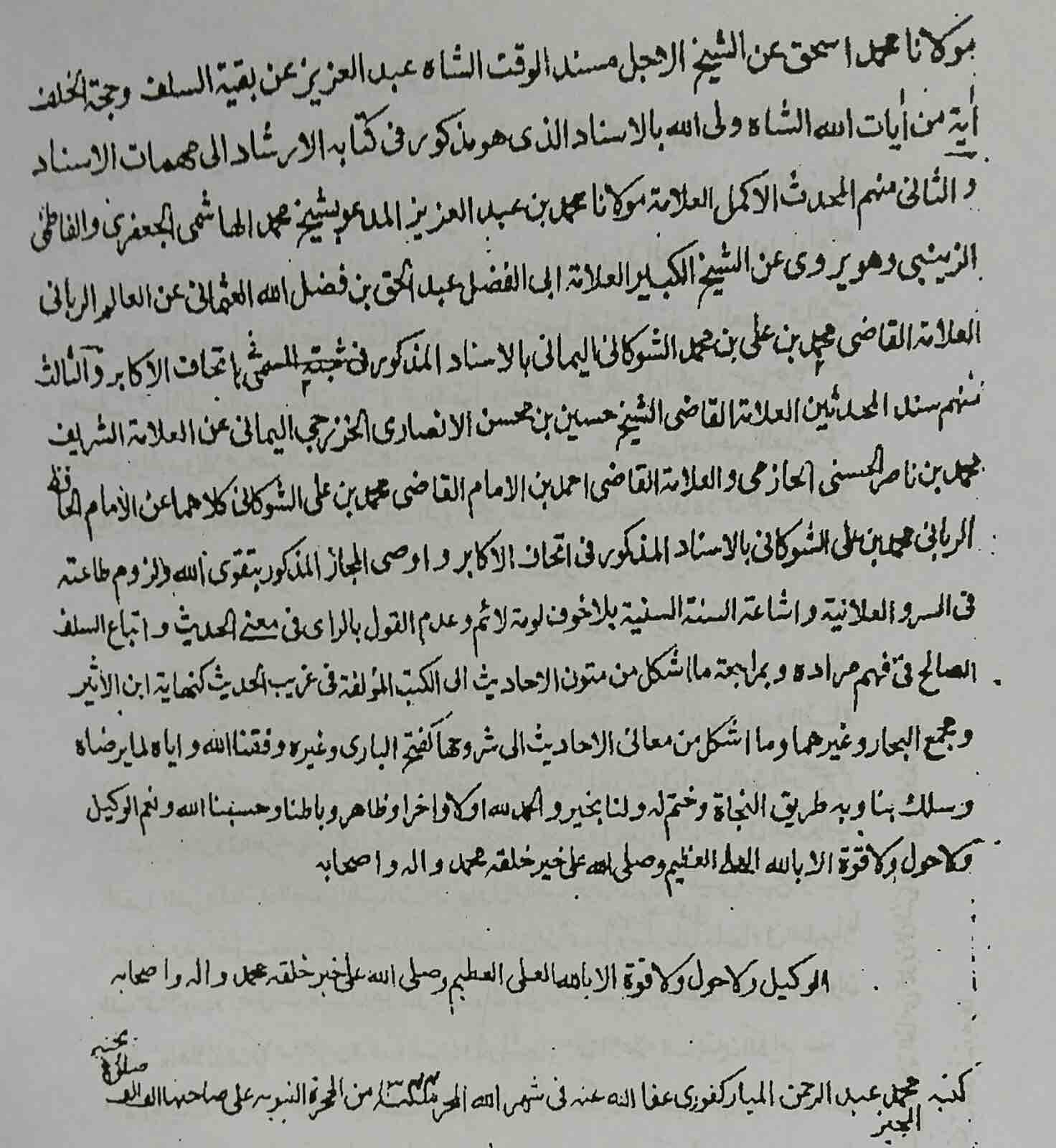 i mentioned in one of the previous posts that I shall present the chain and ijazah of Shaikh Muhammad ibn Ibrahim Aal ash-Shaikh, the Grand Mufti of Saudi ʿArabia prior to Imam Ibn Baz, from Shaikh al-Allamah Abul ʿAla ʿAbd al-Rahman Mubarakpuri (d.1353H) the Indian Hadith Master which was facilitated by the Moroccan Hadith Master and revered Scholar of the Maghreb, Shaikh Taqi al-Din Hilali in 1349H

the Ijazah is for the 6 canonical books of hadith as well as other books which Imam Shawkani had chains for. 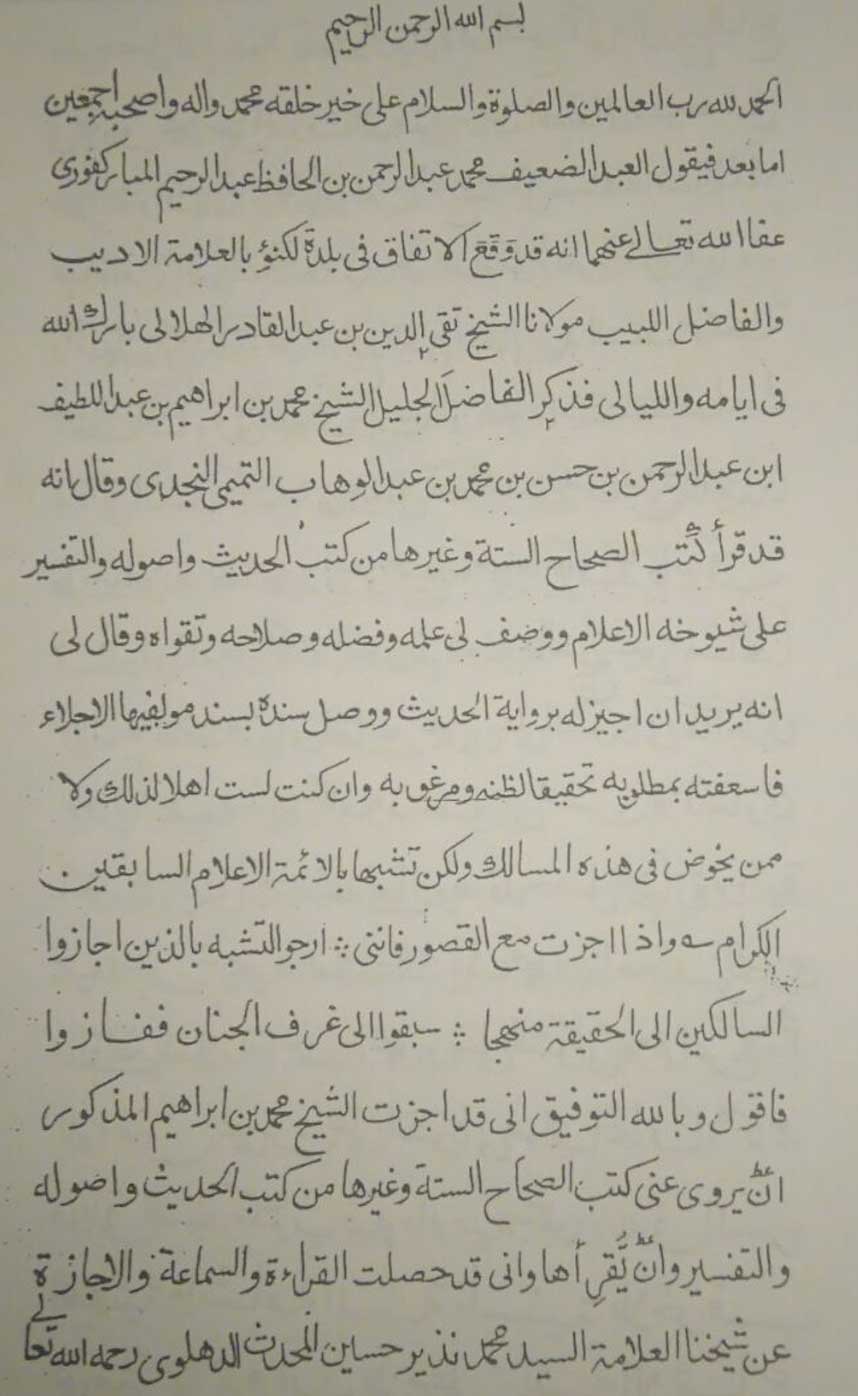 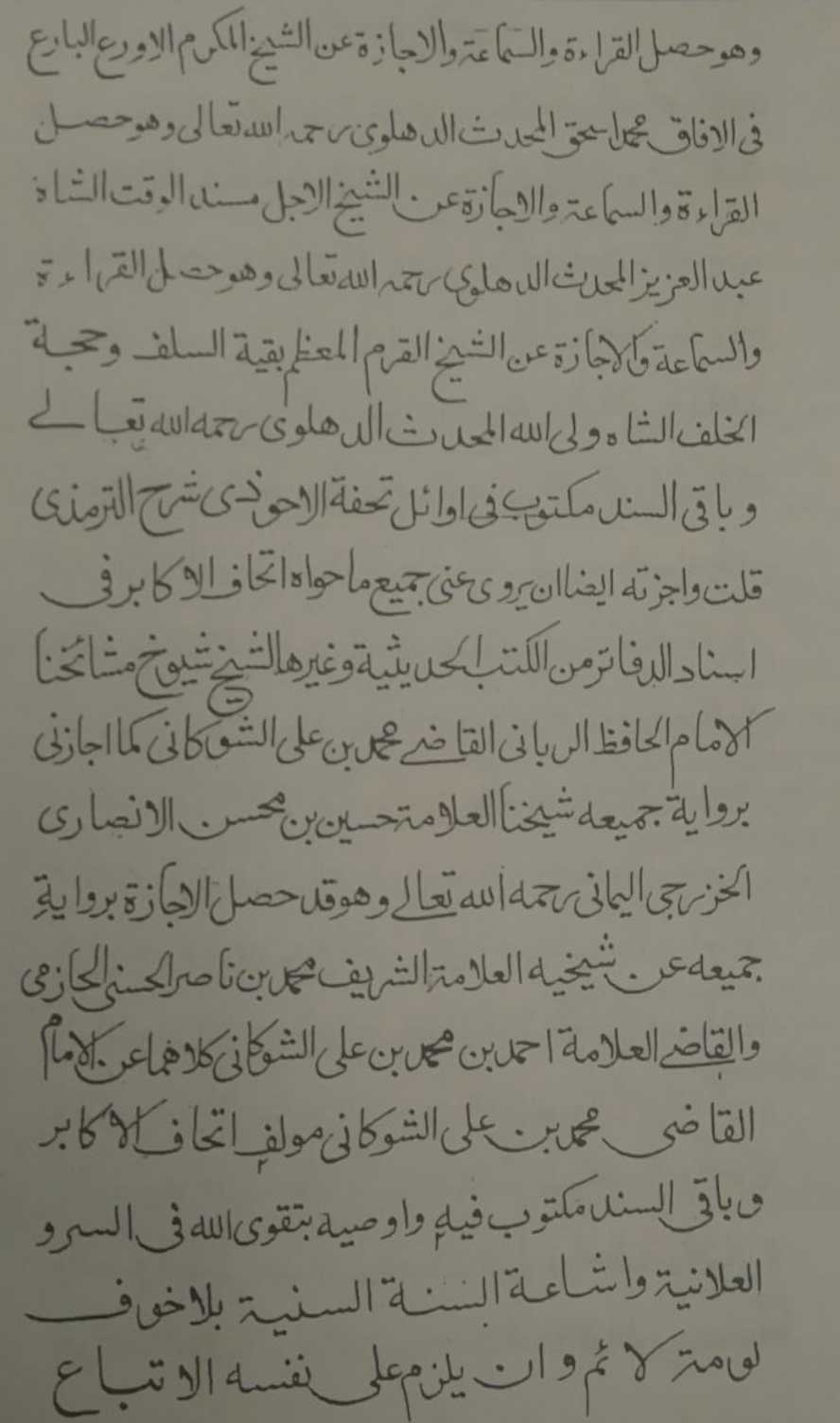 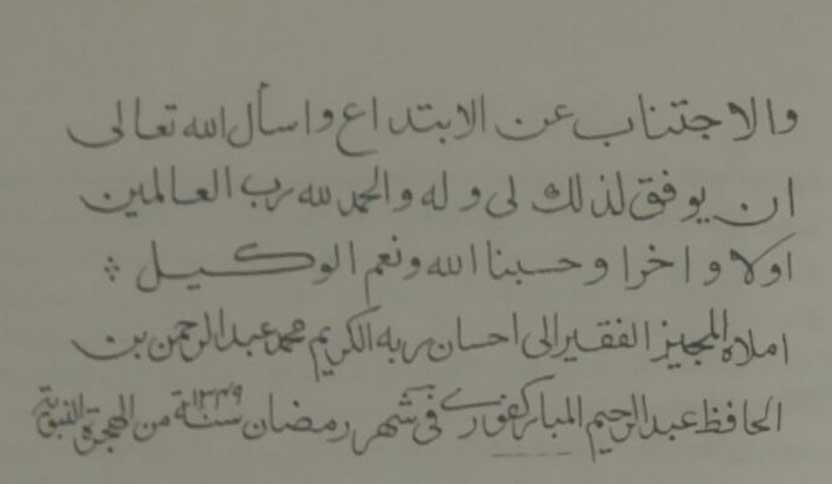 He was born in 1260/1844 in Mau in Northern India. He studied with numerous Scholars. He was under the tutelage of the Indian Hadith Master, Shaikh Sayyid Muhammad Nazir Hussain Muhaddith Delhi (1320H) who he also received Ijazah from and was considered to be from amongst his most notable students. He also gained ijazah in hadith from Shaikh Abbas bin and al-Rahman al-Yamani in 1297H, who was the direct student of Imam Shawkani.

Mali has seen the ruthless slaying of Muslims, and we pray to Allah for their forgiveness, Amin. Our brothers, sisters and children in Mali deserve an equal amount of love, veneration, respect and care as any other Muslim.

I wanted to paint Mali in a better light. We know the ludicrous and garbage filled Islamophobic media does a pretty decent job of being biased and showing it's money worth to it's neocon masters, of course no surprises there.

We want to share the rich and vibrant history of the transnational Salafi community while focussing on Mali and also the intrinsic link of Ahl al-Sunnah. This, we hope, will also add further clarification and diversify the oft-repeated yet incorrect presentation of the so called modern development of the Salafi Movement, as projected by the modern Islamologists, who claim Salafism grew out of Egypt at the turn of or early 20th century.

Out of Mali came the formidable and amazing Salafi scholar, Shaykh Muhammad Abdullah b. Mahmud al-Madani. He was born in 1319/1906, he was born around Timbuktu and was Tuareg in origin. The Shaykh migrated to Madinah with this father when he was just 5 years old around 1324H. His father, who was also a scholar, Shaykh Mahmud al-Timbukti died before King Abd al-Aziz took control of the Hijaz.

Shaykh Muhammad Abdullah b. Mahmud al-Madani studied with the scholars of Madinah during his time at Madrassah al-Ulum al-Shar'iyyah. He went on to teach at the same Madrassah after finishing his studies. Then in 1353/1934 he was appointed as an Imam of Masjid al-Nabawi in Madinah. He remained as the Imam for a while and thereafter resigned from this post in order to travel to India to deepen and to excel in Ilm al-Hadith (the science or knowledge of Hadith)

In India, Shaykh Muhammad Abdullah went straight to Banaras (Varansi) and other areas in that region. Banaras and the surrounding areas were already rich in the science and knowledge of Hadith due to the efforts of Shaikh Abd al-Haqq Muhajar Makki, the student of Imam al-Shawkani.

The Shaykh then returned to Saudi Arabia, in Abha and then finally returning to Madinah around 1357/1938.

After a very period in Madinah the Shaykh returned to his native homeland of Mali. While in Mali the Shaykh spread Tawhid and Sunnah and clarified the methodology of Salafiyyah. He taught in masajids and schools of Gao as well as the border region between Mali and Niger, he also, very often had disputes and discourses with the Sufis, who were undoubtedly disturbed by this clear dawah.

He spread Tawhid and Sunnah i.e. the way of Ahl al-Sunnah and Salafiyyah in Mali, Niger, northern Nigeria, Ghana and even Burkina Faso. His relatives accepted the dawah and slowly by slowly the dawah spread to such an extent that the Sufi Qadiri’s of Timbuktu were also influenced.

They said his approach to dawah was that of moderation and so progression was slow and steady. This perhaps was a good strategy due the oppression and control of the colonial renegades, who were the worst of mankind in their behaviour towards other humans.

Shaykh Muhammad Abdullah b. Mahmud al-Madani, was no doubt one of the pioneers of the Salafi Dawah in that region with his efforts spreading the countries cited above. He set a solid structured framework for the dawah to continue and to spread far beyond his region. Gao, today serves as the main region and the central place of Salafi Dawah.

Shaykh Muhammad Abdullah b. Mahmud al-Madani died in 1360/1951 and he left behind some amazing efforts. May Allah accept it from him, forgive all of his sins and enter him into Paradise with a lofty status. Amin
Top
Post Reply
8 posts • Page 1 of 1