If the Salaf of the ummah of our noble prophet had been alive what would they say about what Yasir Qadhi is saying and his deviation? Below is just one example of our Salaf taken from the tremendous book of ‘Aqeedah and Manhaj of Imam Abu Nasr As Sijzee [d.444] Salaf entitled ‘A refutation of those who deny the speech of Allah having sound and letters’. 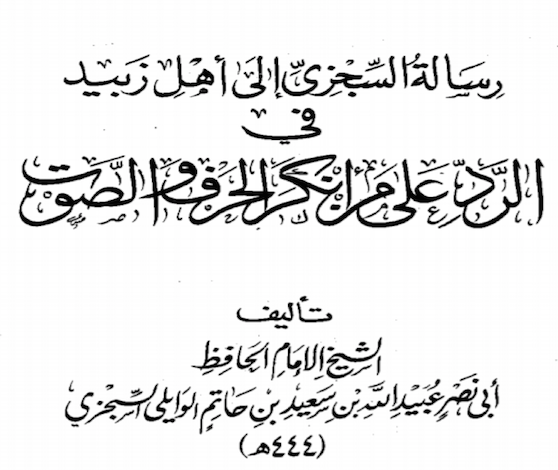 We should pay careful attention to what the Imam has written as it also applies to the callers to misguidance of our times, despite some ignorant fools [they know well who they are] who claim the statements of the Salaf cannot be applied today!

[A] Yasir Qadhi has been plotting and planning strategically to harm Ahl us Sunnah and to try to make people doubt its very core. What Yasir Qadhi is doing is nothing new or revolutionary as the scholars have spoken about those innovators and enemies of the deen who were upon a similar path to before him in medieval times. Imam Sijzee states:

“And from [the points being mentioned] is that the people of Bid’ah conceal their madhab [‘‘Aqeedah and Manhaj] from a group of people whilst showing it to another group and this is a resemblance of the way of the Heretics, Zanaadiqah. Due to this way of these people [of Bid’ah] the lay people and those who starting out in learning Islamic knowledge fall into their trap [and accept there Manhaj] because what they show these people on the surface seems to be in accordance with Ahl us Sunnah, whilst they deny [the accusations and blame] that is said regarding them so that they can entrap and take advantage of these people [the lay person and beginner learning Islamic Knowledge]. If the person accepts what they say, these [misguided individuals] take him away from the Sunnah little by little until they take him away from the Sunnah completely”.

This is exactly what Yasir Qadhi and his likes have done. They have fooled and hoodwinked the people whilst they harboured an enmity to the way, ‘Aqeedah and Manhaj of the Salaf.
For those who know Yasir qadhi and his methodology after reading the above words of this great Imaam will see it is an almost reflection of the entire Manhaj and biography of yasir Qadhi that we have seen unravel before our very own eyes. Yet some still say to make excuses and that they will not warn against this man and his misguidance!

The possible end result of the path that the likes of Yasir Qadhi and those upon his ‘Aqeedah and Manhaj have chosen in not accepting the authentic narrations, athaar and tafseer of the Salaf is as Imam Sijzee said:

“All those who oppose the Sunnah and the Manhaj of the people of Athar [The Ahl ul Hadeeth] will eventually be exposed after his matter is looked into. As for the people of Hadeeth they will have no shame or degradation on them at the end because they did not innovate anything [new in the religion], but instead they adhered to following the narrations. Then whoever makes a claim that there is fault or disgrace with the narrations after they are ruled to be saheeh [authentic] cannot be even be considered a Muslim”

This is the end result that we should all be fearful of for arrogantly opposing the books, Sunnah and way of the Salaf. Imam Sijzee’s words speak volumes in and of themselves!

[C] The solution to the Yasir Qadhi [and many others] misguidance and deviation is as stated by Imam Sijzee:

“Whoever wishes to be saved form the evil of these people [of misguidance] and from desires, then it is an obligation that the reference point be the Quran, hadeeth and following the Salaf in all that a person hears and witnesses. A person should never accept any statements unless he asks for a definitive aayah [of the Quran] or a saheeh authentic hadeeth or an authentic statement of a sahaabi so that he can establish [the validity] of what is being claimed [by the one making the claim].”

“He should carefully look at the books of Sunnah from the Salaf”.

This is the solution to the ‘Yasir Qadhi’ problem and every problem that the people of misguidance present Ahl us Sunnah with. Salvation is by referring back to the book, Sunnah, understanding of the Salaf and what is preserved from them in their writings and narrations.

[D] For those who still think its fine to read Yasir Qadhi books and articles, listening to his lectures, maybe even secretly praising and admiring him, be warned. Imam Sijzee said!

“Be careful [leave off] the written [and spoken] words of the person whose condition has changed, verily there are the scorpions [poison] within them and its possible that the antidote [of this persons poison and deviation] is not available [it will destroy you]”

The above excerpts from Imam Sijzee are self-explanatory for those who want to pay heed and return to the truth before it’s too late.
We ask Allah to forgive us and guide us to the straight path and accept this work from us.